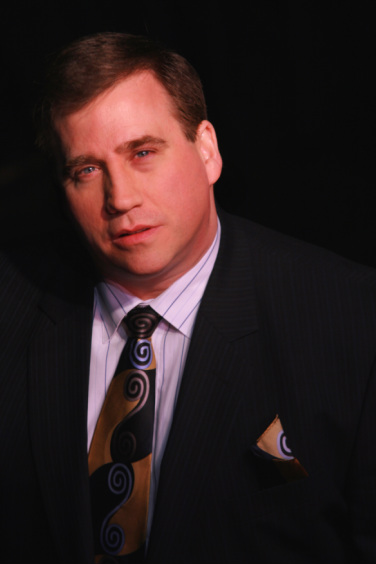 Bill Daugherty was born and raised in St Louis, Missouri and was brought up in a family of musicians. His father, Richard Daugherty, is one of the premiere jazz pianists in the city and his mother, JoAnn, made a name for herself early in her career as a vocalist in nightclubs, on the radio and in USO shows. His father is the featured pianist on Bill's solo albums, "Look To The Rainbow" and "Souvenirs". Bill's uncle, Bob Daugherty, is an established bassist in the world of jazz and lent his talents to the albums, as well.

As a child, Bill and his sisters Kathy and Patty were constantly working on part harmony and were billed as "The Three Sharps." When he was 13, Bill started a group called "The Vaudeville Players" which he cast, directed and appeared in. They would entertain around the area putting on shows at fairs and nursing homes. After graduating from Parkway West Senior High, Bill studied musical theatre at Southwest Missouri State University in Springfield, Missouri for two years and then transferred to the Conservatory at Webster University in St Louis where he earned a BFA in acting. During college, Bill made his money by doing commercial and jingle work whenever possible and delivering singing telegrams on nights and weekends. He was a featured performer at Six Flags Over Mid-America and was a member of the Young Americans, doing a stint on the Robert E. Lee on the St Louis riverfront. From there, he traveled to Florida and Georgia as a singing waiter with Musicana Enterprises after which he hopped up to Philadelphia to get his first taste of the great Northeast. During his stay in Philly, he starred in Side By Side By Sondheim at Plays and Players Theatre and did a summer season at the newly resurrected Keswick Theatre in Glenside, PA.

At the end of his contract he joined his pal, Rebecca Luker, and took off for The Big Apple. The two of them had paid their dues slinging fried chicken and singing for their supper in Pine Mountain, Georgia the summer before. They took an apartment in Park Slope, Brooklyn and while Rebecca pursued a career in theatre, Bill embarked on a successful career as a cabaret and concert artist, all the while keeping active in local and regional theatre.

His first Off-Broadway credit was as a member of the company of players known as Light Opera of Manhattan in residence at the Cherry Lane Theatre. Bill then went on to work for the Paper Mill Playhouse in Millburn, New Jersey first as a replacement for Sean McDermott in Candide, followed by Naughty Marietta (featuring the legendary Allan Jones), Annie Get Your Gun (with Judy Kaye) and Damn Yankees (starring Davis Gaines and Orson Bean and directed by George Abbott at the tender age of 99). Some of his favorite roles he's performed include Hero in A Funny Thing Happened On The Way To The Forum, Leo Hubbard in The Little Foxes, Magaldi in Evita and Nicely Nicely Johnson in the first European tour of Guys And Dolls. Other NY and regional show credits include: My Fair Lady, The King and I, The Pajama Game, Pippin, Fiddler On The Roof, A Christmas Carol, Man Of LaMancha, The Fantasticks, H.M.S. Pinafore, Trial By Jury, Death of A Salesman, Androcles and The Lion, Night Of The Iguana, Arsenic and Old Lace and Joseph And The Amazing Technicolor Dreamcoat.

Shortly after arriving in New York, Bill made his nightclub debut at a Sunday Brunch Cabaret at Vivian Blaine's Park Ten Restaurant on 34th and Park. His show was entitled, Sunday In The Park Ten With Bill and it was with that show that he was presented to his first New York audience by the beloved Ted Hook. Bill's accompanist for that show was a man by the name of Robin Field, whom he had met while singing at the open mike at the popular Five Oaks Restaurant in the Village. Club owner Erv Raible liked what he saw and booked Bill at Don't Tell Mama with his second show, Fantasies. Again Bill recruited the services of Robin Field and it was during that show that the two developed a chemistry that seemed contagious. Audiences began referring to them as "Daugherty & Field." Although the two had never sought to team up with a partner, it seemed like the most logical and certainly the most enjoyable next step. Greg Dawson booked Daugherty & Field to fill in for Blossom Dearie in The Ballroom with their new show Teamwork. With the help of publicist David Rothenberg, the two garnered their first in a string of rave reviews from The New York Times and all the other major publications. They were on their way!

The duo went on to become one of the most celebrated musical comedy acts in the business, entertaining audiences across the country and abroad. Daugherty & Field played most of the major clubs and concert halls in New York City, including Carnegie Hall, Weill Recital Hall, Town Hall, The Oak Room at The Algonquin, Club 53 at the NY Hilton, The Russian Tea Room, Eighty Eight's and were featured for seven years running at Kaufman Hall in the 92nd St Y's Lyrics & Lyricists series, under the loving auspices of the late Maurice Levine. They were guest artists on local and national radio and television shows, were headliners for society galas and benefits raising money for major charities, including Equity Fights Aids, The Bailey House, LAMDA, SAGE and The New York League for The Hard of Hearing. Their travels took them to venues such as LA's Gardenia Room, Chicago's Halsted and Briar Street Theatres, London's Pizza On The Park and Die Kleine Komedie Opera House in Amsterdam. Whether they were doing one-nighters in Miami, entertaining patients at The Actor's Fund Home or making a yearly appearance at The Friends Of Old Time Radio convention, the two made an impression which lasted.

Eventually, the team parted company when Field chose to pursue other interests on the west coast. During the next few months, Daugherty built a new show and, with the encouragement of long time friend Erv Raible, presented Start All Over Again at Eighty Eight's which won Bill another Bistro Award, this time for Outstanding Vocalist. Shortly thereafter, Bill was featured at the Kennedy Center in This Funny World, a critically acclaimed salute to Rodgers & Hart starring Mimi Hines and with cabaret legend Julie Wilson in the same show in Miami.

Bill began directing and teaching and eventually producing as well. He has been a member of the faculty at New York's premier musical theater conservatory Collaborative Arts Project 21 (CAP21) since 1997 where he teaches Vocal Performance, Vocal Technique, Audition Repertoire and Private Voice. Some of his former students include: Matthew Morrison, Anne Hathaway, Kristen Bell, Lindsay Mendez, Natalie Cortez, Krysta Rodriguez, Jason Tam and Bobby Steggert. He keeps a stable of private students as well as offering his services as a music consultant for cabaret, theatre and film. He was a pioneer member of a New York venture called "Camp Broadway", conceived by Susan Lee, which is an outreach program for the theatrical community aimed at young performers both locally and nationally. The summer of 2000 was Camp Broadway's first national tour which was met with great success. He has taught master classes across the country and has directed with Stages For Learning and was the co-founder of Curtain Up! – an educational theater workshop series.

Bill is the recipient of 4 MAC awards and 3 of Backstage Magazine's Bistro Awards. Mr. Daugherty is the creative director for Thoroughbred Productions in New York and producer for their label. His award winning solo album - Look To The Rainbow - and his most recent release – Souvenirs - are available on Thoroughbred Records. He also produced, for that label, Broadway darling Nancy Anderson’s first solo CD, Ten Cents A Dance and vocalist (and long-time friend) Connie Pachl's, Coming Through.

Daugherty has conceived and directed a number of successful revues including the runaway off-Broadway hit “When The Lights Go On Again” – a new 1940’s musical – which ran for 2 years at the Triad Theater. It won the Backstage Bistro Award for Outstanding Musical Revue in 2008. His subsequent production, “Brother, Can You Spare A Dime? – Songs and Stories from the Great Depression” opened in the fall of 2009 to critical acclaim and ran for six months. Most recently he and musical director Doyle Newmyer mounted their fourth collaboration: “On The Record – A Tribute To The Great Vocal Groups of the 20th Century” which wowed audiences with a multimedia presentation. All three Original Cast recordings are available through Thoroughbred Records.

Bill is a playwright, published novelist and a respected music archivist. He has done consultant work over the years for record labels such as Verve, Sony/Columbia, MCA/Decca and Jasmine Records. His original musical, “Double Trouble” was selected by Disney and Stephen Schwartz to participate in an ASCAP workshop in the summer of 2008 and he is currently in the developmental stage of a new book musical called “Island Of Hope”.  Bill released his first novel - “Two Rights" - in the summer of 2017 using the pen name Billy Allen, thus embarking on yet another tangent career as a fiction writer - something that has been a lifetime endeavor.

Bill has had the great pleasure of knowing and working with some of the greats in the business and even got to meet and befriend some of the idols of his childhood and has had a hand in the careers of some younger stars as well including:

Among his many passions, Bill is an avid collector of antique phonographs, clocks, autographed photos and Hollywood memorabilia. He has a collection of over 30,000 records and CD's with the primary emphasis on big bands and vocalists from the 20's-60's.

With many irons in the fire and projects on both the front and back burner, Bill Daugherty continues to lead a life full of passion and promise.

"You came a long way from St Louis!"